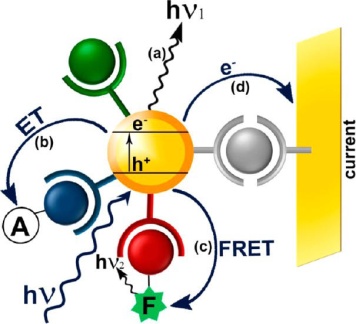 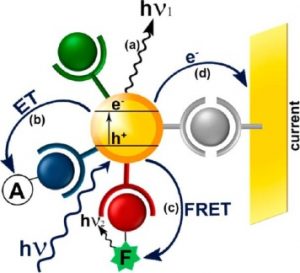 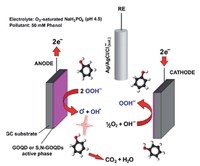 Quantum Holopedia investigates Synaptic Quantum Tunnelling in Brain Activity in regards to Quantum Brain Dynamics as well as its role in contributing to quantum coherence in Macroscopic Quantum States that need to persist in hot and wet brain environment [1].

Quantum Neuroelectrochemistry can be interpreted as means to connect intrinsic and extrinsic factors of thinking, where the intrinsic factors are the quantum systems and quantum processes at the Quantum electrochemical processes in the human organism are to be viewed independent of the morphological imaging of electrophysiology. However, morphological imaging is helpful for the observer to develop intuitive abilities for predicting the quantum systems intrinsic to the inner thinking. Through such practice, the observer is able to train his neural network and create predictors of quantum systems. The observation becomes substituted with the predition, which does not collaps the wave function and thus does not reduce quantum systems to space time continuum which is the case for the observation. This prediction technique can be thought of as the Vitrual Reality (VR) linked with Artificial Intelligence (AI).

Additional support is given by techniques such at fMRI and EEG tomography which give a traditional complementary imaging in the process of morphological search.

Quantum processes at the junction of synapses recognized as electrochemistry of the processes happening between neurons, allow for a new approach to neurofeedback therapy also in terms of phenomena such as electrochemical tunneling of neurotransmitters at the synapses and Brain Blood Tunnels (BBT) between the brain and morphological system.

This new understanding of internal and external factors of thinking is a breakthrough in the neurofeedback therapy and trainings where the morphological imaging of brain activity and the prediction of the quantum systems of the mind are both two independent therapies in themselves as well as complementary and supportive techniques that enable to better understand and improve the human ability to think.

As such, this approach gives a sense of achievement and success in quantum therapy in terms of observation of the quantum electrochemical processes.